While working with a therapist to untangle the riddle around his own marital discord, Dr. Robert Glover, the author of No More Mr. Nice Guy, noticed something in his own psychotherapy practice: Nearly all his male patients seemed to be having the same befuddling experience in their marriages. They were airing the very same grievances.

Session after session, Dr. Glover heard things like: Why isn’t my wife nice to me when I am so nice to her? It’s never enough. I just want to be appreciated. Why doesn’t she want to have sex anymore? And why is she so damn angry all the time?

It didn’t take long for Dr. Glover to realize that droves of other men were following a life script similar to his. Men who go to great lengths to avoid upsetting anyone. Men who constantly seek approval from others, neglect their own needs, sacrifice their personal power, and suppress their masculinity. Men who are especially concerned with pleasing women.

Men who rarely, if ever, stand up for themselves. Men who are frustrated and resentful, constantly struggling to experience the happiness they believe they deserve.

These men suffer from an anxiety and shame-based disorder that has become all too common.

Yes, these men suffer from the Nice Guy Syndrome, and they have bought into a myth.

BUY IT NOW ON AMAZON

Nice Guys believe that if they are good and do everything right, they will be loved, their needs will be met, and they will live a smooth, problem-free life. When this strategy inevitably fails to produce the desired results, Nice Guys just try harder, employing the same tactics over and over again. Einstein would call this f*cking insanity.

So let’s take a deep dive into the Nice Guy Syndrome. Let’s talk about what it is, how it came to be, what’s wrong with it, and how you can start to overcome it.

WHO IS THE NICE GUY?

The Nice Guy is everywhere. You probably know at least one or two quintessential Nice Guys. Hell, you’re probably a Nice Guy yourself if you’re reading this.

So, who is the Nice Guy? Well…

Most Nice Guys possess many if not all of the following characteristics.

THE ORIGIN OF THE NICE GUY SYNDROME: HOW NICE GUYS ARE MADE

Everyone comes into this life as a dependent, needy little baby. Surely this isn’t news to you. But there’s a lot more to the story.

Because babies rely on others to meet their needs in timely and judicious ways, they have an overwhelming fear of abandonment. For babies, abandonment means death. And yet, every baby experiences some degree of abandonment:

He is hungry and nobody feeds him.

He cries and nobody holds him.

He is lonely and nobody pays attention to him.

Furthermore, babies are inherently narcissistic and grandiose. They believe that they are the cause of everything that happens to them – bad or good. As their little baby brains develop, babies think they are the center of the Universe. (Yes, some very annoying adults still think this way. I’m looking at you, Kanye West.)

The human brain is home to a collection of nuclei called the amygdala. You’ve likely heard of it. It is only about the size of your fingernail, but it plays a critical role in emotion and behavior.

The amygdala is perhaps best known for processing fear and controlling your fight-flight-freeze response. It also stores your internalized beliefs and memories. Theoretically, everything you experienced as a child is stored in your amygdala as emotional memory – you can’t find words or pictures for these experiences, but the emotions are there.

The amygdala is basically your emotional operating system; it is hard-wired into every other part of your brain. Your current beliefs about yourself and the world are directly controlled and influenced by the amygdala. This is true for every adult. And every adult has created a persona based on their early life experiences.

Nice Guys are certainly no exception. 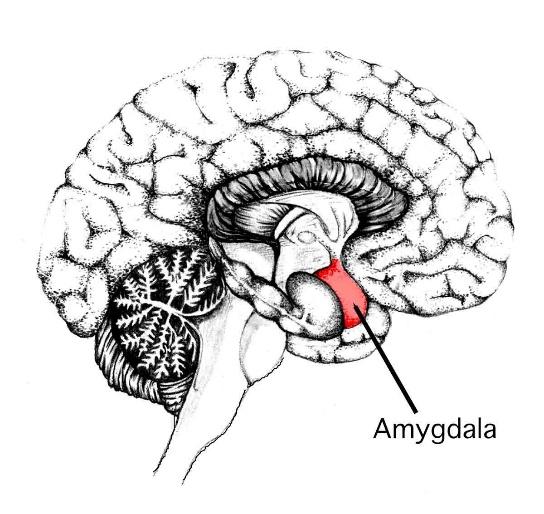 The Nice Guy inaccurately internalized his childhood abandonment experiences and developed the belief that he is bad, defective, and unlovable. In other words, as Dr. Glover often points out, the Nice Guy believes he is not okay just as he is.

The Nice Guy’s amygdala seems to contain a roadmap for life that reads: I must become what I think others want me to be and I must hide anything that might cause others to reject me. This is the foundation for what is known as toxic shame and it wreaks havoc on the lives of Nice Guys.

Because Nice Guys inaccurately internalize their childhood abandonment experiences, they develop survival mechanisms to help them do three things: (1) cope with the pain from these experiences, (2) prevent these kinds of experiences from happening again, and (3) hide their toxic shame from themselves and others.

These survival mechanisms lead Nice Guys to live by the following paradigm: If I can become what I think others want me to be and hide anything that might cause others to reject me, then I will be loved, my needs will be met, and I will have a smooth, problem-free life.

Even though it is based on the faulty interpretation of childhood events, this paradigm controls everything Nice Guys do in adulthood.

THE TWO TYPES OF NICE GUYS

After years of working with Nice Guys, Dr. Glover began to see that their survival mechanisms generally manifest in one of two ways, creating two types of Nice Guys:

While the two types of Nice Guys may differ in the ways they try to mask their toxic shame, they both operate from the same life paradigm. And both believe they are not okay just as they are. Dr. Glover only makes the distinction between the two types of Nice Guys to help each see their distortions more clearly. Neither is as bad or as good as they believe themselves to be. They are merely wounded souls, navigating the world with an outdated and inaccurate roadmap.

Nice Guys have probably always existed to some degree. As Dr. Glover affirms, “It is unlikely that there has ever been a notable shortage of mama’s boys and henpecked husbands.” But after working with countless men, women, and couples, Dr. Glover concluded that it is most likely a series of social changes and events – beginning around the turn of the century and accelerating after WWII – that produced the unprecedented number of Nice Guys we see today.

These social changes and events include:

Today, one can clearly see that the Nice Guy Syndrome didn’t begin or end with the Baby Boomers. In fact, Nice Guy conditioning is more prevalent now than ever before.

Masses of young men in their late teens, twenties, and thirties all exhibit the characteristics and behaviors that define the Nice Guy Syndrome. Nice Guy fathers raised Nice Guy sons who will create more little Nice Guys – and the process will likely repeat itself again and again.

When Dr. Glover wrote No More Mr. Nice Guy in 2003, he suspected that the third generation of Nice Guys was just beginning. He now suspects that Nice Guys will be here for generations to come

WHAT’S WRONG WITH BEING A NICE GUY?

First of all, please know that there is absolutely nothing wrong with being nice to others. It will serve you well to go through life as a decent human being.

But there is a stark difference between being a nice person and being a “Nice Guy” as Dr. Glover defines it. In fact, the term Nice Guy is a misnomer because Nice Guys are anything but nice.

Take out your journal. If you don’t have one, get one. Do you believe you’re a Nice Guy?  If so, which Nice Guy characteristics do you exhibit? Write your answers down in your journal.

THE OPPOSITE OF A NICE GUY

Being an Integrated Man means being able to accept all aspects of yourself.

An Integrated Man doesn’t strive to be perfect or gain the approval of others. He feels good about himself from the inside out. He seeks to improve himself – not so others will like him, but because he knows he can add value to the world.

HOW TO OVERCOME NICE GUY SYNDROME

Overcoming – or breaking free – from the Nice Guy Syndrome requires a radical change in behavior and perspective. It requires doing something different and facing your fears. It will also affect your personal relationships. While the people in your life will be supportive of you making positive changes, they may initially be confused. That’s okay.

The first step to overcoming Nice Guy Syndrome is finding a safe person or safe people. This is imperative. You cannot do Nice Guy recovery work alone. You must have safe people to whom you can reveal yourself. Revealing yourself to safe people allows you to release your toxic shame and toxic perfectionism, confront your insecurities, and challenge your self-limiting beliefs.

Working with a coach or joining a men’s program (like Integrated Man University) are integral to your Nice Guy recovery work.

When you’re conscious, you can notice when you:

When you’re able to notice these behaviors, you can stop yourself and start behaving in a more integrated way.

Additionally, Nice Guy recovery work requires you to start building what Dr. Glover calls a “great cake of a life.” Many Nice Guys do not have rich and fulfilling lives. A “great cake of a life” includes good male friendships, leaning into challenge, pursuing your passions and interests, and regular, strenuous exercise.

All that said, there is not one perfect way to recover from the Nice Guy Syndrome. Nor is there a specific timeline you need to follow. What’s most important is that you make a lasting commitment to personal growth. And hopefully, you’ll keep growing until the day you die.